How many neurons does it take to change a lightbulb? 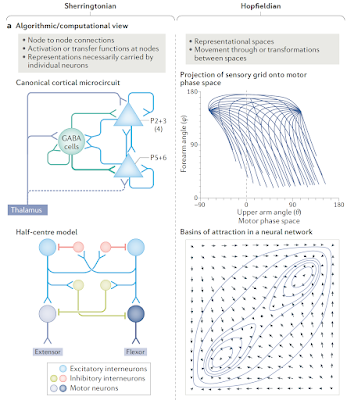 I’ve been reading this excellent paper by David Barack and John Krakauer, on “ Two Views on the Cognitive Brain ”, and it made me wonder about which mode of nervous system function might have come first. To use their terminology, the “Sherringtonian” view (named after Charles Scott Sherrington ) focuses on individual neurons as the elementary units of control, computation, and cognition. In this view, neurons can be thought of as individual relays in a control circuit (such as a reflex) or as elements performing discrete logical operations, which can be combined into larger circuits to carry out more complex computations. It’s all very bottom-up, algorithmic, and mechanistic (and, indeed, provided the inspiration for artificial neuronal networks, as conceived by McCulloch and Pitts ). The “Hopfieldian” view (after John Hopfield ), by contrast, takes the view that more global and dynamic patterns of activity across populations of neurons are the elements encoding and representing cogni
Post a Comment
Read more

Getting to the bottom of reductionism – is it all just physics in the end?

By Kevin Mitchell - August 17, 2022
There was some interesting recent discussion on Twitter regarding claims made in a new book by physicist Sabine Hossenfelder , in which she at least seems to assert that everything that happens in the universe is reducible to, and deducible from, the low-level laws of physics. Strikingly, she presents this view as an irrefutable scientific fact, rather than an arguable philosophical position. It’s worth digging into these ideas to probe the notion that the behavior of all complicated things, including living organisms, just comes down to physics in the end.     Patrick Baud quoted several passages from the book, “ Existential Physics ”, that argue that reductionist theories are the only game in town. With the important caveat that I have not read the book in full, and granting that some additional nuance is probably added elsewhere, it is worth quoting these passages in full to try and get the gist of these arguments. I’ve interspersed a few brief comments between the quoted sectio
Post a Comment
Read more

On conceptual rigor: “What do we take ourselves to be doing?”

By Kevin Mitchell - July 15, 2022
I had the pleasure recently of attending a Festschrift celebration for Prof. Dorothy Bishop , who has been a leading light in the study of neurodevelopmental disorders (especially speech and language disorders) for decades. She has also been a vocal and effective proponent of improving reproducibility in scientific research, writing on her popular blog , on twitter , in journal articles , and even presenting in the houses of parliament on the subject.     Dorothy’s efforts, along with many others in the Open Science “movement”, have helped to highlight crucial issues of methodological and statistical rigor that have led to irreproducibility across many fields, along with potential solutions and ways that the scientific community collectively can address these problems. These efforts are aimed at improving the quality of what we are doing. But there is sometimes a deeper question to be asked: why are we doing what we are doing? What is the conceptual basis for the research we’re c
Post a Comment
Read more

By Kevin Mitchell - June 06, 2022
When living creatures perceive something, they’re concerned with two questions: What is it? and: What should I do about it ? You might think that the machinery for answering those questions evolved in that order – like you’d have to know what something is before you can know what to do about it – but it seems likely to have been the opposite. The actions of the simplest creatures when faced with various stimuli in the world are mostly coordinated by pragmatic couplings – signals that are prescriptive rather than descriptive . But these mechanisms laid the foundation for the evolution of decoupled internal representations with true semantic content.   For living organisms to go on persisting – which, let’s face it, is their whole schtick – they have to take in energy and raw materials (food, oxygen) and use them to keep their internal economy humming. Many organisms manage this process – known as homeostasis – by staying put and letting resources come to them. The problem with this
Post a Comment
Read more
More posts