Showing posts from August, 2020
Show all

Are bigger bits of brains better? 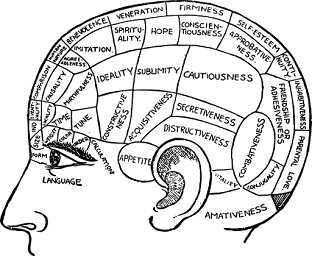 We scoff at the folly of phrenology – the simplistic idea that the size and shape of bumps on the skull could tell you something about a person’s character and psychological attributes. It was all the rage in the Victorian era (the early to mid-1800s) in the UK and the US especially, with practitioners armed with calipers claiming to measure all kinds of personal propensities, from Acquisitiveness and Combativeness to Benevolence and Wonder. The skull bumps were just a proxy, of course – the idea was that they reflected the size and shape of the underlying brain regions, which were what was really associated with various traits. It all seems a bit quaint and simplistic now (apart from the entrenched association with racism ), but while we may like to think we have moved on, a lot of modern human neuroscience is founded on the same premises.    - The first premise is that different mental functions or psychological traits can be localised to specific regions of the brain.   - T
Post a Comment
Read more
More posts