Showing posts from August, 2012
Show all

Why have genetic linkage studies of schizophrenia failed? 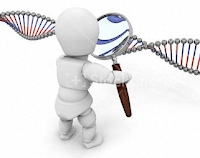 “If there really were rare, highly penetrant mutations that cause schizophrenia, linkage would have found them”. This argument is often trotted out in discussions of the genetic architecture of schizophrenia, which centre on the question of whether it is caused by rare, single mutations in most cases or whether it is due to unfortunate combinations of thousands of common variants segregating in the population. (Those are the two extreme starting positions). It is true that many genetic linkage studies have been performed to look for mutations that are segregating with schizophrenia across multiple affected members in families. It is also true that these have been unsuccessful in identifying specific genes, but what does this tell us? Does it really rule out or even argue against the idea that most cases are caused by a single, rare mutation? (In the sense that, if the person did not have that mutation, they would not be expected to have the disorder). This
11 comments
Read more

As many as a quarter of people will experience mental illness at some point in their life ( over a third in any given year with more expansive definitions). At least 5% of the population suffer from lifelong brain-based disorders, including intellectual disability, autism spectrum disorders, schizophrenia, epilepsy and many others. Many of these conditions dramatically increase mortality rates and reduce fecundity (number of offspring), impacting heavily on evolutionary fitness. Faced with these numbers, we have to ask the question: are human brains especially fragile? Are we different from other species in this regard? Is the brain different from other organs? As all of the disorders listed above are highly heritable, these questions can be framed from a genetic perspective: is there something about the genetic program of human brain development that makes it especially sensitive to the effects of mutations?       I have written lately about the robustnes
12 comments
Read more
More posts