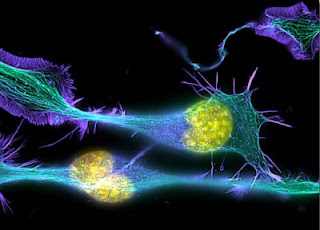 Most neurons in the brain are not born in their final position – they are generated by cell division in one part of the brain and have to migrate, sometimes over long distances, along complicated routes, to finally arrive at their pre-specified destination.  This process entails an incredibly complex and dynamic set of genetic instructions and interactions between different cell types.

A prime example is the migration of interneurons to the cerebral cortex – these inhibitory neurons make up one half of a balancing act that controls all cognitive functions in the cortex, but, unlike the excitatory neurons of the cortex, they are born in a completely different part of the brain (what will become the striatum).  Many researchers have been trying to understand how these neurons find their way specifically to the cortex.  A number of genes have been found which encode guidance cues which can attract or repel the migrating neurons and which mark out their correct pathway.  These cues are sensed by the receptor proteins expressed on the surface of the migrating neurons.  This basic mechanism has been at the core of most models of neuronal cell migration.

A new paper adds a surprising new twist to this story, one that may be especially important for the migration of neurons generated in the adult brain.  One of the major sites of generation of new neurons in adults is called the sub-ventricular zone (SVZ), where an actively dividing population of neural stem cells persists in adults.  New neurons born here are destined to repopulate the olfactory bulbs – structures at the very front of the brain which receive information from odorant receptor neurons – where there is a high rate of turnover of neurons (in contrast to most of the brain).

The migration of these new neurons from the SVZ occurs along a very discrete route called the rostral migratory stream (RMS).  One challenge for the migration of these neurons is that the mature cellular structures in the adult brain present a physical and molecular barrier to their movement.  This is a similar problem faced by nerve fibres trying to regenerate in the adult spinal cord or brain – as the nervous system matures, glial cells (a type of non-neuronal cell that outnumber neurons by about 10:1) begin to form an environment which actively restricts the movement of cells and the growth of new axons.  This makes some sense as a mechanism to keep everything in place once the complicated manoeuvres of neural development have been completed. 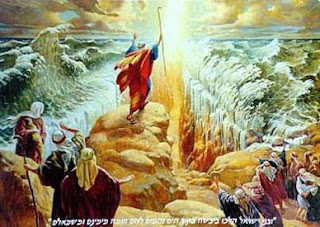 The migrating neurons in the RMS thus have some hostile terrain to cross.  It now turns out that they accomplish this by turning the tables on the cells in their environment.  Rather than simply responding to attractive or repulsive cues that they encounter, they actively secrete a repulsive molecule themselves, which helps to clear out glial cells from their path.  These star-shaped glial cells, called astrocytes, then form a tunnel through which the migrating cells are free to pass.  If the migrating neurons do not make the repulsive protein, called Slit-1, or the astrocytes do not express the receptors for this protein (Robo-1 and -2), then the neurons cannot clear this pathway and many fail to reach their destination.

This mechanism is a nice example of a reversal of a prominent paradigm – of course, these neurons are still themselves guided by other cues in their environment, but this adds a new and unexpected twist to the story.  More importantly, perhaps, it could have general implications as a mechanism to encourage the migration of new neurons or of damaged nerve fibres in the adult nervous system.  If such neurons can be encouraged to express a path-clearing molecule like Slit-1, their chances of successful navigation or regrowth may be greatly enhanced.