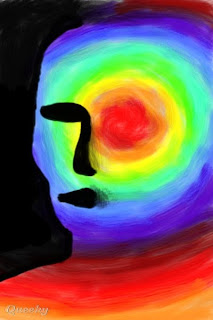 Colour does not exist. Not out in the world at any rate. All that exists in the world is a smooth continuum of light of different wavelengths. Colour is a construction of our brains. A lot is known about how the brain does this, beginning with complicated circuits in the retina itself. Thanks to a new paper from Greg Field and colleagues we now have an even more detailed picture of how retinal circuits are wired to enable light to be categorized into different colours. This study illustrates a dramatic and fundamental principle of brain wiring – namely that cells that fire together, wire together.

Colour discrimination begins with the absorption of light of different wavelengths. This is accomplished by photopigment proteins, called opsins, which are expressed in cone photoreceptor cells in the retina. Humans have three opsin genes, which encode proteins that preferentially absorb light of different wavelengths: short (S, in what we perceive as the blue part of the spectrum), medium (M, green) and long (L, red). Each cone expresses only one of these opsin genes and is thus particularly sensitive to light of the corresponding wavelength. However, by itself the response of a single cone cell cannot be used to determine the colour (wavelength) of incoming light. The reason is that each cone is responsive to both the wavelength and the intensity of the light – so an M-cone would respond equally to a dim green light or a strong red light.

The L/M system evolved much more recently, due to a gene duplication that occurred in the lineage of Old World primates, probably around 40 million years ago. The duplication of the primordial L/M opsin gene allowed the two resultant genes to diverge from each other in sequence, generating proteins with different absorption spectra, which could then be compared. Something similar can actually be achieved even in species with only one copy of the L/M gene. This gene is on the X chromosome, so females will carry two copies of it. Due to the random inactivation of one X chromosome in each cell in females, each cone will express only one of the two copies of this opsin gene. If the two copies differ from each other, encoding proteins with alterations in the amino acid sequence that affect their light absorbance, then what will arise is a set of L cones and a set of M cones.

All of this raises an important question – how are the inputs to these different cone cells compared? If the cells which express L and M cones are essentially the same, with the sole difference being that they express different opsin genes, then how is the wiring in the retina set up so that their inputs are distinguished, allowing their subsequent comparison? Cells in the retina are arranged in a series of layers. Cone cells connect, through bipolar and other cells, to retinal ganglion cells, which in turn convey visual information to the brain. Retinal ganglion cells integrate inputs from multiple cones, but in a very specialized way – some cones connect through ON bipolar cells (which are activated by light) and others through OFF bipolar cells (which are inactivated). Typically, one cone in the centre of an array of cells is connected to an ON bipolar cell, while surrounding cones connect to the same retinal ganglion cell target via OFF bipolar cells. The result is that the light signal hitting an array of cones is integrated – if the central cone is an L cell and the surrounding cones are M cells then the retinal ganglion cell will be most strongly activated by red light.

This has been known for quite a long time now. What has not been clear is how this system gets wired up during development. S, M and L cones are distributed randomly across the retina. S cones, which are the least frequent, are molecularly distinct from L/M cones in many ways and connect to a dedicated set of S channel bipolar and retinal ganglion cells. The development of the wiring that carries out the comparison between S and L/M cones is thus molecularly specified. This cannot be the case for the comparison between L and M cones, which differ only in the opsin gene they express.

The new study by Field and colleagues worked out in breathtaking detail the circuitry of the retina at a cellular level. Their results reveal the beauty and elegance of this circuitry but also resolve an important question relating to how L and M cone cells are wired. Each retinal ganglion cell in the centre of the retina receives ON inputs from a single cone and OFF inputs from the surrounding cones. In the periphery, however, the ON “centre” is composed of up to twelve cones. For the ganglion cell to discriminate colours there must be a bias in how many L or M cone cells wire up to it through the ON and OFF channels.

Their results reveal exactly such a bias and further show that it cannot be explained simply by random clumping of L or M cones in the photoreceptor array. What this indicates is that there is some additional mechanism whereby inputs from just one type of cone are strengthened in each of the ON and OFF channels. In effect, the L and M cones are competing for inputs in each channel, presumably through so-called “Hebbian mechanisms” whereby inputs to a cell are strengthened if they fire at the same time and asynchronous inputs are actively weakened. Despite their being no molecular differences between these cone cells, the brain is thus primed to wire them into distinct channels based on their patterns of activity.

A remarkable experiment performed a few years ago dramatically illustrates this principle. Mice are naturally dichromatic – they only have two opsin genes (S and L/M). Researchers in Jeremy Nathans’s group replaced one copy of the L/M gene with a version of the human L gene. This meant that female mice could be generated which carried one mouse opsin (L/M) and one human version (L). Cone cells could express one or the other of these genes. The result was astonishing – in visual tests, these mice could clearly distinguish between light of wavelengths which they were previously unable to discriminate. (They could now tell red from green). Despite normally having only two channels, their nervous system was clearly primed to perform this comparison.

Amazingly, this may extend to humans as well. The opsin genes in humans can also be polymorphic – each one comes in several different versions. Females who carry one version of, say, the L gene on one X chromosome, and another on the other X chromosome, can effectively have four different channels of absorption: S, M, L and L’. If the retina is primed to compare inputs based on their patterns of activity then one would predict that such females would be tetrachromatic – they should be able to distinguish between more colours than trichromatic individuals (just as trichromats can distinguish more colours than dichromats – people with a mutation in one of the L or M opsin genes, who are red-green colourblind).

This increased ability to discriminate colours is, apparently, indeed present in about 50% of females and can be revealed by a very simple test. Consider the picture of the colour spectrum shown below. If you print this out and mark on it with a pencil everywhere there seems to be a clear border between two distinct colours, then what you will find is that most trichromats mark out about 7 colour domains, while tetrachromats mark out between 9-10 (and dichromats about 5).

So, where a man may just see “green”, a woman may see chartreuse or olive. Realising that people literally see things differently (and not just colours) could avoid needless argument. (That said, the woman is clearly more right, and it is usually best to concede graciously).