Panpsychism – not even wrong. Or is it?

By Kevin Mitchell - February 01, 2018
I had an interesting exchange with philosopher Philip Goff on Twitter (@Philip_Goff ) recently, prompted by his article: “Panpsychism is crazy, but it’s also most probably true”, published in Aeon. There he lays out a series of arguments that he claims make it likely that all pieces of matter possess some degree of consciousness.

“According to panpsychism, the smallest bits of matter – things such as electrons and quarks – have very basic kinds of experience; an electron has an inner life.” 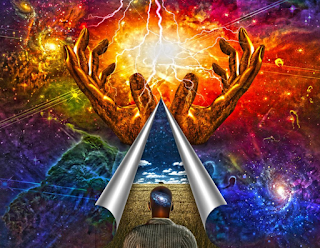 Image source
The idea is that consciousness may be not solely a property of highly complex systems, such as ourselves, but a fundamental property of every piece of matter in the universe, like mass. Some bits of matter would have more of it than others, but all – down to the level of elementary particles like electrons and quarks – would have some kind of subjective experience. I’d like to say there’s more to it than that, that it involves a whole fleshed out framework that explains all manner of phenomena in a new way, but actually that’s pretty much it.

It’s easy to make fun of panpsychism – so let’s begin. On the face of it, such claims are absurd. However, the idea has been around for millennia, with many prominent supporters – Plato, Spinoza, William James, Alfred North Whitehead, for example – and it is experiencing a recent resurgence of sorts. But if you look more deeply, you can see, or at least I will argue, that panpsychism has so little real content that it’s questionable whether it rises even to the level of a hypothesis, never mind a theory.

It is instructive, however, to follow the logic of the arguments put forward, if only for illustrating what I contend is exactly the wrong way to think about consciousness – as an elemental property of bits of matter, as opposed to an emergent property of an organised dynamic system that is made of bits of matter.

Strangely, most of the arguments that Goff offers in support of panpsychism centre more on broad issues in the philosophy of science, than on any advantages of the idea itself as an explanatory framework. He begins by saying that we should not reject panpsychism out of hand just because it is counter-intuitive. Fair enough. As he points out, some other theories are counter-intuitive, like special relativity or wave-particle duality. I would certainly accept that, though I definitely would not include the idea that we are descended from apes in that list. However, the fact that some scientific theories are counter-intuitive does not make it a general selling point in favour of plausibility.

1. Physical science tells us nothing about the “intrinsic nature” of matter, and hence there's a gap in our picture of physical reality that must be filled by broader theorising. By this he means that physics defines the properties of things by their dispositions – by what they do, rather than what they are.

This assertion is fine with me, as far as it goes, though it’s basically just an expression of our ignorance – never a strong starting point for an argument. More crucially, the term “intrinsic nature” is doing a lot of heavy lifting for something that is left so vague here. It’s not really clear what it means, nor is it clear that it’s actually a thing. As we’ll see below, there’s also some sleight of hand involved as we go from thinking of the intrinsic nature of elementary particles to the intrinsic nature of organised systems of matter. Should we expect those things to be in any way commensurate? Using the same term simply makes the assumption that we should. (That assumption, however, is also the conclusion – this is the first circular argument).

2. The only thing we know about the intrinsic nature of matter is that some of it, the stuff in the brains, has a consciousness-involving nature.

Here we can see the easy slide from the microscopic to the macroscopic – from elements of matter to organised systems of matter. If we simply use the term “intrinsic nature” to refer to both, and we simply refer to human beings as “matter”, without reference to the crucial fact that it is organised matter, then this move almost makes sense – it implies there is no reason to think there is anything qualitatively different at the two extremes of complexity. (Again, that is both an assumption and a conclusion).

3. The simplest theory consistent with that data is panpsychism. That is, if we know some of the matter in the universe has an intrinsic nature that entails consciousness, then it is parsimonious to assume that all matter does – at least more parsimonious than assuming some does and some doesn’t and then having to explain the difference.

There is an appeal here to Occam’s Razor – the well accepted scientific principle that if you have two theories that both explain something, the simpler one is usually better. (Both more heuristically useful and more likely to be correct). The key to wielding this razor, however, is that the two theories in question actually explain something. A simple statement that just declares consciousness to be a fundamental property of all matter does not explain anything. It’s merely a cop-out. It does not advance our understanding in any way. It does not constitute a theory at all, never mind one that explains what needs explaining.

As H. L. Mencken almost said: “For every complex problem, there is an answer that is clear, simple, and wrong.”

Again, you can see in premise 3 another circular argument. The fact that only some matter (i.e., that constituting human beings, and probably many other kinds of animals) has the property of consciousness is exactly the thing we are trying to explain. Simply saying everything is conscious to some extent – that it is an intrinsic property of bits of matter, like mass – assumes the thing the theory is trying to conclude.

Now, you might counter by saying that I am the one making circular assumptions – if I simply insist that only certain complex systems are conscious, then of course I rule out panpsychism before giving it a chance. So, let’s see if it actually has anything to recommend it – does it explain anything or predict anything that would make us want to take it seriously?

Goff claims (here) that panpsychism “solves the hard problem of consciousness” – the mystery of how mere physical matter can give rise to subjective experience. This would be pretty remarkable, if true, given that is one of the deepest mysteries left for science to even begin to resolve. The “solution”, however, is simply to assert that consciousness is a fundamental property of all matter. There’s no real reason to think that is the case – certainly no evidence that it is. Nothing follows from the assertion. It makes no predictions, testable or otherwise. It doesn’t explain the nature of subjective experience that a rock may be having or how that property comes to be. The hard problem remains just as hard – harder even, as now we have to ask it about electrons and photons too.

Indeed, you can make exactly the same series of arguments with respect to “life” instead of “consciousness”, highlighting the absurdity not just of the claim, but of the logic:

Again, that’s a simple statement, but it’s not a simple theory, because it’s not a theory at all.

If you would counter that “life” is too nebulous a concept for this comparison to be apt, I would argue that though the boundary between living and non-living is fuzzy at certain points, if you think about the boundary between living and dead, that makes it pretty clear that being alive is a real, definable property of some things, under some conditions, and not others.

More broadly, the comparison with life highlights a huge unstated premise – the hidden assumption – that underlies this chain of logic. It is that the properties of organised, complex, dynamic systems derive solely from the properties of their components (or at least may do so). Though Goff refers to the theory as “non-reductive”, I can’t think of anything more reductive than claiming that the most crucial property of what may be the most complex system we know of – the human brain – inheres in its simplest components.

The answer to the mystery of consciousness – and it remains very much a mystery – surely lies in a nonreductive physicalism that recognises that complex, even seemingly miraculous properties (like conscisousness, or life itself), can and do emerge from the dynamic interactions of matter when it is organised in certain highly complex ways, not from the bits of matter themselves. In this view, consciousness is a property of a process (or of many interacting processes), not of a substance.

So, after due consideration (maybe more than it is due), I will stick by my assessment, that panpsychism is not even wrong. But I remain willing to be convinced that it is.