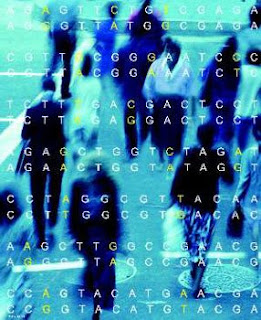 Schizophrenia is a common and devastating disorder, involving stable impairments in a wide range of cognitive, sensory and motor domains, as well as fluctuating episodes of psychosis, characterised by disordered thoughts, hallucinations and delusions. Though it tends to emerge as a full-blown disorder in late adolescence or early adulthood, a wealth of evidence supports the model that it is caused by disturbances in neural development at much earlier time-points, including prenatally. Recent neuroimaging analyses have supported psychological theories of schizophrenia as a “disconnection syndrome”, showing altered structural and functional connectivity between (and also within) many regions of the brain. Schizophrenia can thus be thought of as the result of alterations in brain wiring, and these alterations are, in turn, caused by mutations.

There is strong and consistent evidence from twin, adoption and family studies that schizophrenia is highly heritable. Though this fact is now widely accepted there is far less agreement on exactly how it is inherited. Risks to family members are clearly much higher than to the general population (approximately ten percent in first-degree relatives, versus 0.5-1% prevalence in the general population). And concordance between monozygotic twins is much higher (averaging 0.48) than between dizygotic twins (about 0.17). On the other hand, a majority of cases of schizophrenia are sporadic and do not have an affected first-degree relative. In addition, looking across families with multiple affected individuals, no clear pattern emerges that suggests a simple Mendelian mode of inheritance, or at least not a consistent one.

Various models have been proposed to explain the genetic architecture of schizophrenia. Early researchers suggested Mendelian inheritance, either recessive or dominant, with partial penetrance (i.e., not everyone who inherits the putative causative mutation develops the disorder). Based on the fact that any one of these modes of inheritance could not explain all cases of schizophrenia, and on a rejection of the notion that different cases might follow different modes of inheritance (i.e., genetic heterogeneity), these models have been almost completely replaced by a polygenic model. This states that schizophrenia arises due to the inheritance of a large number of genetic variants in any individual. Any one of these variants alone would have a small effect on risk, but collectively, a “toxic combination” of such variants could lead to disease. To explain the prevalence of the disorder, such variants must be common in the population. The alternative model, which has been dubbed the multiple rare variants model, proposes that schizophrenia is caused in each individual by a single mutation and that such mutations are rare because they are rapidly selected against. To explain the prevalence of the disorder under this model requires a high mutation rate and a large target of genes that can result in schizophrenia when mutated.

A recent set of papers has directly tested the common variants, polygenic model (cited below). These papers describe very large genome-wide association studies (GWAS) of schizophrenia, carried out in unprecedented collaborations on huge samples by large numbers of researchers in different facilities across the globe. The goal of these studies is to find alleles of common variants that are significantly enriched in people with schizophrenia (cases) versus those without (controls). Under the common variants model, each such variant is likely to increase risk only very slightly itself and is therefore likely to be at only slightly higher frequency in cases. However, comparing frequencies of a set of common variants across the entire genome in large samples offers enough statistical power to detect even very modest effects. The hope is that identifying such “risk genes” will lead to insights of the pathogenic mechanisms of the disorder or offer the means to predict level of risk in individuals.

The main finding of these three studies, consistent with several smaller forerunners, is that there are no common variants of even modest effect size. None of these studies alone detected a single such variant. When combined in a meta-analysis, a few regions emerged with very small effect sizes. These explain only a tiny fraction of the total heritability of the disorder, however. Considering the demonstrable power of these studies to have detected variants of modest effect if they existed, these negative results provide the strongest evidence yet that the common variants, polygenic model is incorrect.

(Note that a further analysis does suggest some polygenic contribution to risk, but based on the combined effects of thousands of variants. The simulations used to estimate the magnitude of this effect are far from conclusive, however. Regardless of its overall contribution to risk, this finding could be consistent with a “genetic background” effect, which modifies the penetrance and expressivity of rare, causal mutations.)

Are these disappointing results cause for dismay? Quite the opposite, I would say. They provide additional support for the multiple rare variants model, which is now gaining traction with the recent discoveries of many such rare, causal mutations. This should encourage geneticists to re-focus their efforts on families and individuals and move away from an epidemiological approach that focuses on risk across the population. Schizophrenia liability is not a quantitative trait and should not be treated as one. Happily, the technologies to detect rare, causal variants are now available, most obviously whole-genome sequencing. The upside of this model being true is that the effects of such mutations in single genes can be very directly modeled in animals, to help elucidate the pathogenic mechanisms, pathophysiology and etiology of the disorder.