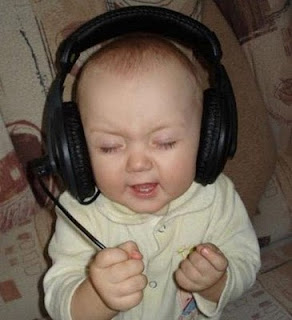 Music has a bizarre power to engage and affect us – to move us emotionally or literally, whether it’s foot-tapping, finger-drumming or booty-shaking.  It seems to have properties that make it automatically and powerfully salient for human beings.  An obvious question is whether this reflects some innate properties of the human brain or whether it emerges over time due to experience with types of music.  Put another way, does the brain shape the music or the other way around?  Does music show particular structures because those are inherently salient and pleasant to humans or is this reaction caused by the brain’s tendency to specialise in processing stimuli that occur with some statistical regularity in its environment?
A new study by Perani and colleagues demonstrates very convincingly that the human newborn brain already shows strong functional specialisation for music processing.  By performing functional magnetic resonance imaging on newborns, all under 3 days old, they found a strongly lateralized pattern of activations in response to music.  These responses were much stronger in the right hemisphere, as is observed in adult humans. 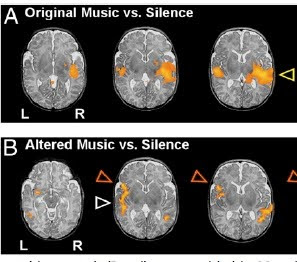 More interestingly, they found that modifications to the music, which introduced infrequent key shifts or dissonance through shifting one component a half-tone higher, resulted in a very different response pattern.  This type of altered music did not engage the right hemisphere network as efficiently as the original music, and did engage regions in the left hemisphere that were not responsive to the original music.  Thus, the right hemisphere auditory network is not just specialized for music, it is specialized for music with the appropriate structure (consonance) which most listeners agree is most pleasant.
Previous studies have shown that the left hemisphere is preferentially activated by language stimuli even in newborn infants.  The authors speculate that there may be a general division of labour between the two hemispheres, with the left more specialized for processing temporal characteristics of stimuli and the right for processing spectral characteristics (including frequency or pitch).  Interestingly, the right hemisphere is also involved in processing prosody – the melodic components of natural speech – modulations in emphasis and inflection that communicate emotional content and tone.  It seems likely that the apparent specialisation “for” music reflects the fact that these circuits are pre-tuned to be most responsive to stimuli with specific acoustic characteristics.  We did not evolve to enjoy music – music evolved (or was actively designed) to best stimulate our natural preferences.
Newborns thus arrive in the world pre-wired to process different types of acoustic stimuli in specialized circuits, localized to either hemisphere, one for detecting and distinguishing sequences of sounds in time and the other for decoding oscillatory components of the stimuli, including tone, pitch, timbre, rhythm, etc.  How this specialisation arises during development is a fascinating topic, and one that is poorly understood.  The mechanisms underlying the initial establishment of left-right differences in early embryos are fairly well-established but how these affect the developmental programmes in the brain is far less clear, though a number of genes have been found that are differentially expressed in the two hemispheres of developing human brains (see Sun et al, below).
The fact that functional lateralisation depends upon a genetic programme also suggests that variation in the responsible genes might lead to differences in the degree or direction of lateralisation in different people.  This is known to occur for language lateralisation (which can vary with handedness, itself under genetic influence).  Lateralisation is also known to be affected in a range of psychatric disorders, most notably schizophrenia.  How the kinds of mutations that result in these disorders affect lateralisation and how this contributes to psychiatric symptoms are important questions for the future.
Perani, D., Saccuman, M., Scifo, P., Spada, D., Andreolli, G., Rovelli, R., Baldoli, C., & Koelsch, S. (2010). Functional specializations for music processing in the human newborn brain Proceedings of the National Academy of Sciences, 107 (10), 4758-4763 DOI: 10.1073/pnas.0909074107
Sun, T. (2005). Early Asymmetry of Gene Transcription in Embryonic Human Left and Right Cerebral Cortex Science, 308 (5729), 1794-1798 DOI: 10.1126/science.1110324
hemisphere infant innateness language laterality music prosody wiring