The prevailing model for how the network of the brain is organized is the “small-world” network.  In such a network, most units, or nodes, are very sparsely and only locally connected.  However, a very small proportion of nodes, called hubs, are very highly connected, and over longer distances.  These hubs thus provide an indirect but short pathway of connectivity between any two nodes in the network (like people with thousands of “friends” on Facebook).  This overall architecture is highly efficient and robust and can be observed not just at the level of networks of neurons but also at  a higher level of brain organization, in the pattern of connectivity of cortical areas.  Indeed, it is also typical of genetic, social and many other networks, including the internet.

In the brain, the existence of hub neurons had thus been hypothesised, but these beasts had not actually been observed until a recent study by Rosa Cossart and colleagues.  They were analysing the activity patterns of very large numbers of neurons in the developing hippocampus.  At this stage, network activity in the hippocampus consists of fairly simple, large and rhythmic depolarisations, which are easily detected.  (These oscillations are known to be crucial for the normal maturation of the network). 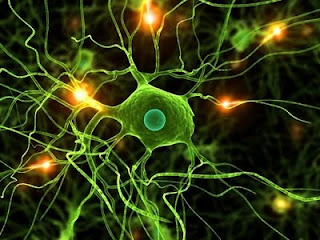 As well as recording the activity of the neurons they were also able to directly stimulate individual cells.  Stimulating the sparsely connected neurons did not have much effect on the activity of the rest of the network.  In contrast, stimulating the hub neurons had dramatic effects, directly activating many other neurons in the network and also affecting the synchrony of firing – in some cases greatly increasing it and in others completely abolishing it.

The hub neurons have several interesting properties: first, they are GABAergic – i.e., when they synapse on another cell they release the neurotransmitter GABA.  In adults this tends to inhibit the activity of the recipient neuron, though in developing networks, GABA has excitatory effects.  They also have very extensive axonal arborisations – they project over larger distances and make a greater number of and stronger synaptic connections than non-hub neurons. Finally, they are also more responsive to inputs and quicker to fire action potentials themselves, placing them in a position to orchestrate the responses of the entire network.

Though hub neurons have so far only been observed in the hippocampus it seems almost certain that they will also be found in the cortex, where their effects may be fundamental for the information processing capabilities of the brain.