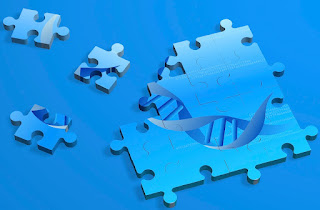 A debate is raging in human genetics these days as to why the massive genome-wide association studies (GWAS) that have been carried out for every trait and disorder imaginable over the last several years have not explained more of the underlying heritability. This is especially true for many of the so-called complex disorders that have been investigated, where results have been far less than hoped for. A good deal of effort has gone into quantifying exactly how much of the genetic variance has been “explained” and how much remains “missing”.

The problem with this question is that it limits the search space for the solution. It forces our thinking further and further along a certain path, when what we really need is to draw back and question the assumptions on which the whole approach is founded. Rather than asking what is the right answer to this question, we should be asking: what is the right question?

The idea of performing genome-wide association studies for complex disorders rests on a number of very fundamental and very big assumptions. These are explored in a recent article I wrote for Genome Biology (referenced below; reprints available on request). They are:

1) That what we call complex disorders are unitary conditions. That is, clinical categories like schizophrenia or diabetes or asthma are each a single disease and it is appropriate to investigate them by lumping together everyone in the population who has such a diagnosis – allowing us to calculate things like heritability and relative risks. Such population-based figures are only informative if all patients with these symptoms really have a common etiology.

2) That the underlying genetic architecture is polygenic – i.e., the disease arises in each individual due to toxic combinations of many genetic variants that are individually segregating at high frequency in the population (i.e., “common variants”).

3) That, despite the observed dramatic discontinuities in actual risk for the disease across the population, there is some underlying quantitative trait called “liability” that is normally distributed in the population. If a person’s load of risk variants exceeds some threshold of liability, then disease arises.

All of these assumptions typically go unquestioned – often unmentioned, in fact – yet there is no evidence that any of them is valid. In fact, the more you step back and look at them with an objective eye, the more outlandish they seem, even from first principles.

First, what reason is there to think that there is only one route to the symptoms observed in any particular complex disorder? We know there are lots of ways, genetically speaking, to cause mental retardation or blindness or deafness – why should this not also be the case for psychosis or seizures or poor blood sugar regulation? If the clinical diagnosis of a specific disorder is based on superficial criteria, as is especially the case for psychiatric disorders, then this assumption is unlikely to hold.

Second, the idea that common variants could contribute significantly to disease runs up against the effects of natural selection pretty quickly – variants that cause disease get selected against and are therefore rare. You can propose models of balancing selection (where a specific variant is beneficial in some genomic contexts and harmful in others), but there is no evidence that this mechanism is widespread. In general, the more arcane your model has to become to accommodate contradictory evidence, the more inclined you should be to question the initial premise.

Third, the idea that common disorders (where people either are or are not affected) really can be treated as quantitative traits (with a smooth distribution in the population, as with height) is really, truly bizarre. The history of this idea can be traced back to early geneticists, but it was popularised by Douglas Falconer, the godfather of quantitative genetics (he literally wrote the book). 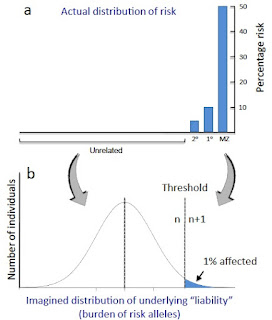 In an attempt to demonstrate the relevance of quantitative genetics to the study of human disease, Falconer came up with a nifty solution. Even though disease states are typically all-or-nothing, and even though the actual risk of disease is clearly very discontinuously distributed in the population (dramatically higher in relatives of affecteds, for example), he claimed that it was reasonable to assume that there was something called the underlying liability to the disorder that was actually continuously distributed. This could be converted to a discontinuous distribution by further assuming that only individuals whose burden of genetic variants passed an imagined threshold actually got the disease. To transform discontinuous incidence data (mean rates of disease in various groups, such as people with different levels of genetic relatedness to affected individuals) into mean liability on a continuous scale, it was necessary to further assume that this liability was normally distributed in the population. The corollary is that liability is affected by many genetic variants, each of small effect. Q.E.D.

This model – simply declared by fiat – forms the mathematical basis for most GWAS analyses and for simulations regarding proportions of heritability explained by combinations of genetic variants (e.g., the recent paper from Eric Lander’s group). To me, it is an extraordinary claim, which you would think would require extraordinary evidence to be accepted. Despite the fact that it has no evidence to support it and fundamentally makes no biological sense (see Genome Biology article for more on that), it goes largely unquestioned and unchallenged.

In the cold light of day, the most fundamental assumptions underlying population-based approaches to investigate the genetics of “complex disorders” can be seen to be flawed, unsupported and, in my opinion, clearly invalid. More importantly, there is now lots of direct evidence that complex disorders like schizophrenia or autism or epilepsy are really umbrella terms, reflecting common symptoms associated with large numbers of distinct genetic conditions. More and more mutations causing such conditions are being identified all the time, thanks to genomic array and next generation sequencing approaches.

Different individuals and families will have very rare, sometimes even unique mutations. In some cases, it will be possible to identify specific single mutations as clearly causal; in others, it may require a combination of two or three. There is clear evidence for a very wide range of genetic etiologies leading to the same symptoms. It is time for the field to assimilate this paradigm shift and stop analysing the data in population-based terms. Rather than asking how much of the genetic variance across the population can be currently explained (a question that is nonsensical if the disorder is not a unitary condition), we should be asking about causes of disease in individuals:

- How many cases can currently be explained (by the mutations so far identified)?

- Why are the mutations not completely penetrant?

- What factors contribute to the variable phenotypic expression in different individuals carrying the same mutation?

- What are the biological functions of the genes involved and what are the consequences of their disruption?

- Why do so many different mutations give rise to the same phenotypes?

- Why are specific symptoms like psychosis or seizures or social withdrawal such common outcomes?


These are the questions that will get us to the underlying biology.