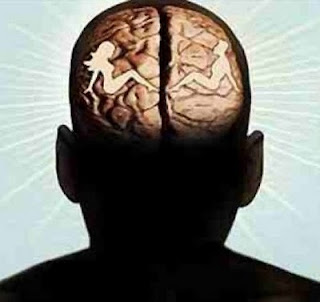 In a recent post, I presented the evidence that sexual preference is strongly influenced by genetic variation.  Here, I discuss the neurobiological evidence that shows that the brains of homosexual men and women are wired differently from those of their heterosexual counterparts.

First, we must consider the differences between the brains of heterosexual males and females.  These differences are extensive and arise mainly due to the influence of testosterone during a critical period of early development (see Wired for Sex).  They include, not surprisingly, differences in the number of neurons in specific regions of the brain involved in reproductive or sexual behaviours as well as differences in the number of nerve fibres connecting these areas.  But they also involve areas not dedicated to these types of behaviours, such as the cerebellum, for example, which is involved in motor control among other things, and which shows a very large difference between men and women.  Another area that shows prominent differences is the corpus callosum, the very large sheet of fibres that connects the two cerebral hemispheres, which is larger in females, despite lower overall brain size.  Indeed, females show greater and more efficient connectivity in cortical networks than males, on average.

It should be emphasized that all of these differences are apparent only in group averages and there is very substantial overlap in the distributions of the measures of different brain regions in males and females.  This is a similar situation to height, where, while it is true that men tend to be taller than women, on average, the distributions overlap and the average difference is not diagnostic – if the only thing you know about someone is their height then you have little predictive power as to which sex they are.  That is because height is affected by many other variables besides sex and so sex simply shifts the mean of a wide distribution.  Similarly, it is not possible to tell from one measurement from a brain scan what sex a person is, because brain structure is also affected by many other variables (primarily the rest of the genome).  Nevertheless, just as with height, the group sex differences in brain structure are very robust and reproducible.  They are also correlated with average differences in many different aspects of cognition, perception, emotion and any number of other psychological domains as well as large sex differences in susceptibility to various psychiatric diseases.

With that as background, what have studies of the brains of homosexual men and women found?  The naïve hypothesis would be that the brains of homosexual men might look more like heterosexual women and vice versa for homosexual women.  In fact, this is exactly what has been found, for the most part, not just in structural measures but also in measures of brain activity.  Starting in the early 1990’s, a number of studies by Swaab, Le Vay and others found differences in the size of specific regions of the hypothalamus between homosexual men and heterosexual men, with homosexual men showing a more female pattern.  As the hypothalamus is involved in regulating many sexual and reproductive behaviours, and given that brain activity feeds back onto the organization of brain circuits, it was possible that such differences arose due to differences in behaviour, rather than the other way around.  Experiments in animals argue strongly against that conclusion, however, given that similar differences can be induced by the manipulation of sex hormones during a critical period of early development.

A number of other studies have found similar results in other areas of the brain where sexual dimorphism is observed, including the size of the corpus callosum and also of the anterior commissure, another tract connecting the two sides of the brain.  Both of these are larger, on average, in homosexual than in heterosexual men, mirroring the difference between heterosexual women and men.  Conversely, various regions in homosexual women tend to show a more masculine pattern.

Interestingly, there is also strong sexual dimorphism in the degree of lateralization of brain structures and of brain activity – in general, men show greater lateralization than women (e.g., for language or face-processing areas or indeed, for the overall size of the cerebral hemispheres), and this trend is reversed in homosexuals.  This is not limited to the brain itself but also extends to facial symmetry– males tend to show greater asymmetry in facial features than females, but the opposite is true for homosexual males and females.

Differences in brain activation have also been observed, for example in response to pheromones or to visual presentation of male or female faces.  In both cases, homosexual men respond in a way that is more similar to heterosexual women, and homosexual women show responses more like heterosexual men.  That may not be a surprise, you say – in fact it may seem obvious that that must be true and is not necessarily evidence for innate differences.

The study by Savic and Lindstrom referred to below extends these observations to another brain system, the amygdala – a region involved in emotional processing, but not directly linked to sexual behaviour.  In heterosexual men and homosexual women, the right amygdala tends to be slightly larger than the left, while the opposite was found in homosexual men and heterosexual women.  Differences in resting state functional connectivity were also observed (this refers to which areas are active in synchrony with the region of interest while the subject is at rest – not performing any specific task).  In the first group there were more connections from the right amygdala and they were stronger to a different set of brain regions (including prefrontal cortex, caudate and putamen) than in the second group (which showed connections with the contralateral amygdala and cingulate).  These results show that differences in brain wiring and functional activation between homosexuals and heterosexuals are not restricted to brain regions directly linked to reproductive behaviours or to responses to sexual cues.

Taking the genetic and neurobiological evidence together thus provides a clear picture of the biological basis of sexual orientation, though the details remain unknown.  It should not be long however before some genetic variants are discovered that are associated with sexual orientation and these should give clues to the genesis of brain wiring differences between the sexes and how they control sexual preference.

Savic I, & Lindström P (2008). PET and MRI show differences in cerebral asymmetry and functional connectivity between homo- and heterosexual subjects. Proceedings of the National Academy of Sciences of the United States of America, 105 (27), 9403-8 PMID: 18559854